A year ago around Rosh Hashana time, one of the Key West city commissioners who is a member of my synagogue asked me to deliver the invocation at the city commission meeting which turned out to be on Tzom Gedalia. I don't fast that well, I usually get a caffeine headache in the afternoon, but I agreed to do it anyway.

It happened to be at the same time when hurricane Matthew was threatening Florida, so I mentioned in my invocation to the city a story I once heard. There was once a scientist who had a private audience with the Lubavitcher rebbe in the 1970s and he told the rebbe that according to his calculations the world will be under water in about ten years , due to "Global warming, rising oceans, SUVS, "etc.

So the rebbe asked him, “if that's the case, that the world will be under water in ten years, what is your solution to the problem?”

So the scientist answered "I have a bucket list for the next ten years including partying in Las Vegas, Key West, Thailand and New Orleans.”

So the rebbe answered the scientist and said "you got it all wrong. "

And the Rebbe continued and said, "That if the world will be under water in ten years then you have ten years to figure out how to live underwater or above water.״

The message is clear. G-d usually doesn't send us a challenge (some people call it problems) that we can't handle (as is mentioned in the Talmud in the tractate of Avodah Zara) and if G-d sends us a curve ball then He also supplied us with the bat to hit the ball. We just have to make sure that we are not scared to pick up the bat and swing,

And if we manage to hit the ball it's a home run.

Get out of your comfort zone.

In other words He wants you to change your nature to serve Him (G-d).

A known example of this is with our patriarch Abraham who was famous for his hospitality and kindness but when G-d wanted to seal with him the ultimate covenant, some of the angels in heaven protested that Abraham was undeserving of such a great merit and the fact that he was kind and hospitable was because that was his nature, but he didn't really transform all of his attributes to G-d , so they argued, he is only worshiping you in his comfort zone and therefore doesn't deserve any special reward.

They said, test him to do a strict act for Your sake, not in his nature. Let him sacrifice his own son and let's see if he'll do it. And despite that it was totally against Abraham’s nature, he passed the test, whereby he received the full covenant.

Many people had a lot of challenges lately including hurricane evacuations. For the most part these events bring out the best in people. It was heartwarming to receive the many offers of help and volunteers from the whole spectrum of the community, in the aftermath of hurricane Irma which we are still currently dealing with in the Florida Keys.

But I believe that if we challenged ourselves on our own a bit more, then G-d would challenge us a bit less. As it says in the Ethics of our Fathers, Chapter 3, "Whoever takes upon himself the yoke of Torah , the yoke of government and the yoke of worldly cares are removed from him."

So challenge yourself this year. Help a friend in need even when there is no hurricane, forgive someone that you are holding a grudge against, go to a Torah class. I guarantee you won't regret it, and if you take upon yourself some of the above challenging resolutions you will have the merit to challenge G-d and ask him to forgive you and grant you a happy and healthy sweet year.

Rabbi Yaakov Zucker is Director at the Chabad Jewish Center
Of the Florida Keys and Key West since 1995 and serves
as the chaplain of the Monroe county Sheriff department.

A Message From Key West 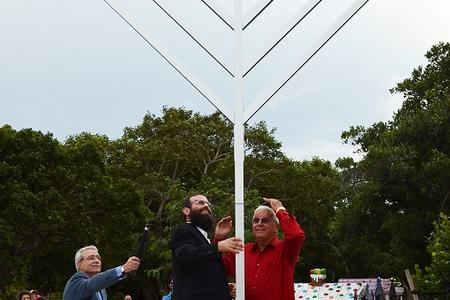