Well, since it is summer, I feel obligated to mow the lawn today so that the kids can actually play there without stumbling over abandoned vehicles. The grass was unbelievable; it was so high it was just ridiculous. So I mowed the lawn, quite successfully I think, and I started thinking about the fact that we can cut the grass. And of course, I just recently trimmed my beard  which was very full grown because we just completed the period of time between Passover and Shavuot, which we call Sefirat Ha’omer – the counting of the Omer and it is a very, very beautiful time. It is a very holy and happy time, because here we are going from physical birth to spiritual birth, going from freedom of the body to freedom of the soul, going from the exodus in Egypt preparation to meet G-d, so to speak, at Mount Sinai and having Him communicate to us what he wants. It is an amazing, amazing time.  Later in history this time also took on a negative, a mournful aspect for two reasons. Number one, because it was during this time about 2000 years ago that many students of the great sage, Rabbi Akiva, died. And the Talmud tells us they died as a result of a plague and the reason this plague hit them was because they were not sufficiently respectful to each other. I’m sure they had respect. I’m sure they spoke nicely. I have no doubt that they were not uncouth or vulgar or swore at each other but there wasn’t sufficient respect for each other. That is quite a lesson for us all.  Because the students died during this time, it took on a mournful aspect and we don’t shave and or have weddings during this time.  Later on, for European Jews, it took on an even more mournful component because of the First Crusade in 1096 during which thousands of Jews in the Rhineland, were murdered, martyred and committed suicide rather than be baptized.

In the words of Charles Dickens, ‘it was the best of times, it was the worst of times.’ It was the best of times because it was the time of growth, the time that we prepare ourselves for receiving the Torah at Sinai. So it is a very happy time. But it is a sad time because of these events of history.  So, due to the mourning I did not trim my beard for over a month and so it began to take over my face. As I mow the lawn I am also thinking about having trimmed my beard.

Now animals in the wild do not cut their hair, or trim their nails. The human being however, engages in quite a bit of grooming - we cut our hair, we shave, trim beards, cut our fingernails, cut our toenails – all things that are not very “natural.”  I believe that a reason for this is because humans are indeed not completely natural, or part of nature like other creatures.

The human being is above nature.  In fact, the goal of the human being is not just to be au naturale, that is to say to let it grow, but we have to be involved not only in growth but we have to be involved also in the cutting of the grass. Meaning for a human being we have to have limitations, we have rules, we have controls and we also have growth and improvement. In Jewish tradition we have positive commandments, things that we are obligated to do, which are expressions of love, of reaching out, of the desire to expand, to make contact with the Being Whom we love. And then we have prohibitions, things that we are not allowed to do, things that are restrictions, which are related to the idea of awe and fear of G-d - the ideas of restraint and contraction

Rav Shlomo Wolbe, a great Jewish scholar of last century, talks about education as involving what he calls zeriyah and binyan. Zeriyah means growth, watering, nurturing, and sunlight. And binyan which means building, giving structure. To a certain degree it is the same two ideas. A parent is obligated, not only to nurture the child and let their natural talents and capacities and individuality of the child grow by providing a warm, happy environment conducive to growth. But that is not enough, there must also be structure. That means we have to build, brick upon brick, we have to create a structure, rules, morality and yes, restrictions and restraint. Not everything which is natural do we do and not everything that we have an inclination to do, do we carry out. And so the parent needs to also build structure as well as nurture.

When G-d placed Adam and Eve in the Garden of Eden, He said to them, le’ovada u’leshomra. Le’ovda means work it, le-shomra means guard it. Ovda means positive growth and nurturing.  Shomra means guarding, and restricting.  We don’t automatically say that because an inclination is natural it is therefore acceptable and correct. Sometimes we have to take our natural inclinations, and as we do with the beard and the grass, we cut,  trim, direct and restrain.

We can take inclinations and channel them in appropriate ways. Sometimes they may need to be stopped completely. If you have an inclination towards violence and theft, that must be controlled.  However, if blood doesn’t bother you at all, then maybe that “callousness” can be channeled toward being a surgeon, EMT, butcher or mohel.

So my thoughts behind my lawnmower are – what is natural needs to be both nurtured and controlled, fertilized and weeded, irrigated and cut.  That goes for grass, beards and certainly for our moral development.

Rabbi Mordechai Becher, originally from Australia, is a Senior Lecturer for the Gateways Organization. He was a Senior Lecturer at Ohr Somayach, Neve Yerushalayim and Darchei Binah in Jerusalem for 15 years, was a chaplain in the Israel Defence Forces and taught in a number of Rabbinic training programs. Rabbi Becher is the co-author of After the Return, and has answered thousands of questions on the Ask-the-Rabbi website. Rabbi Becher received his ordination from the Chief Rabbinate of Israel. He has lectured for the UJA, Jewish Federations, the Zionist Organization of America, Hillel and is on the speakers bureau of the Israeli Consulate in New York. He has taught in Canada, the United States, England, Israel, South Africa, Australia and Russia. He resides with his wife and 6 children in Passaic, NJ. 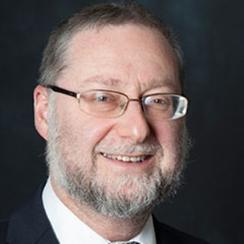