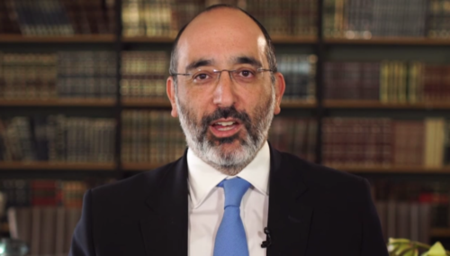 This Shabbos has a special name: Shabbos Chazon, “the Shabbos of the Vision,” taken from the special Haftarah that we always read on the Shabbos before Tisha B’Av, which starts withChazon Yeshayahu, the vision of Isaiah the Prophet about the great calamities that would befall the Jewish People and the destruction of the Temple.

We are now in the midst of the Nine Days, the more intense period of mourning during the Three Weeks from the fast of the 17th of Tamuz up to the fast of Tisha B’Av – unless, of course, Mashiach arrives before then, in which case, as our Sages teach us, all mourning will be turned to celebration.  There are two major themes during the Three Weeks, which are felt more intensely during the Nine Days and even more so on the fast of Tisha B’Av: one is mourning for what we have lost – the Temple – and the repercussions that this destruction has had on the world, and the other is repentance and introspection, finding ways of improving ourselves and acknowledging that the two Temples were destroyed because of the sins of the generation.

We know that the sins which caused the destruction of the first Temple were murder, sexual immorality and idolatry and that the second Temple was destroyed because of the sin of causeless hatred and prejudice between people. The Three Weeks are a time to mourn and at the same time learn the lessons of these destructions and focus on improving ourselves so that we will merit the Final Redemption and the rebuilding of the third Temple, please G-d may it happen soon in our days.

Did we await the Final Redemption?

The Gemara in Tractate Shabbos, page 31a, says that when we leave this world we are judged before G-d on how we lived our lives and what we did or did not do.  The Gemara lists specific questions with which the judgment process begins: the first isnasata venatata be’emunah, did you deal faithfully and honestly in business?  The second is kavata itim laTorah, did you set aside time to learn Torah?  The third isasakta bepiryah ve’rivya, did you involve yourselves with the mitzvah of being fruitful and multiplying?  (Notice that the language used in this question is “did you involve yourself”; it does not say, “did you fulfill” because the results are in the hands of G-d, though we have to do our best).  The fourth one is tzipita li’yeshua, did you long for the redemption?

This forth question actually relates to one of the Thirteen Principles of Faith which the Rambam, Maimonides, one of our great sages of the Middle Ages, sets out based on the Gemara in Tractate Sanhedrin which enumerates the principles of faith that every Jew has to believe in, in order to gain entrance into the next world.  These principles are the basics of Judaism, including such concepts as belief in G-d, belief in reward and punishment and belief in the fact that G-d gave us the Torah.  Included in these principles is the belief that the Messiah will bring the Final Redemption to the world as well as the belief that the dead will be revived in the End of Days.

The question of tzipita li’yeshua, did you long for the redemption, relates to the principle of faith that there will be a Final Redemption.  But the question that is asked of us is not just did we believe that there would be a Final Redemption, but did we look forward to that redemption, did we await it.  The Hebrew word tzipita from the root of tzopheh means not only to look but to hope, to long for something.  The Chafetz Chaim, one of our great sages from the 19th and early part of the 20thcentury, explains that litzpot is to look and to long for, to hope; it is the feeling of looking out for something, like when you are waiting for someone to arrive and you keep looking down the road, wondering when are they coming.  This is what the question tzipita li’yeshua is really addressing: we will be asked, did we want the Final Redemption?  Did we look out towards the horizon waiting for it to happen?

It is important that we come prepared to face this question one day, and pondering this question is especially relevant during this time period of the Three Weeks. How do we long for the Final Redemption?

The purpose of the Final Redemption

There is debate in the Gemara as to what will be the nature of the world in the time of the Messiah.  The Rambam holds in accordance with the one opinion that there will not be a new, miraculous existence.  However the Ramban, Nachmanides, holds in accordance with the other opinion that at the End of Days there will be a new, miraculous existence.  This debate is hinged on how we interpret the famous prophecy of Isaiah, that one day the wolf will lie down with the sheep and the leopard will lie down with the kid goat.  The Ramban interprets this literally, that there will be a whole new existence in the world where aggressiveness, even between animals does not exist.  However the Rambam, in accordance with another opinion in the Gemara, holds that there still will be poverty in the world at that time and that the normal laws of nature will continue.  He interprets this prophecy of the lamb lying down with the wolf as a metaphor for the Jewish People, who in future times will be able to dwell in peace with the nations of the world; anti-Semitism, the illogical, supernatural force that creates suspicion and hatred towards the Jewish People, will end.  This is one way of understanding why we are longing for the Final Redemption: we want to be able to live in the world in peace and harmony with all the nations.

In chapter twelve at the end of the Laws of Kings in the Rambam’s enormous work, the Yad HaChazakah, in which he extracted and codified all of Torah Law from the entire Talmud, the Rambam deals with the final king that will ultimately be appointed: Mashiach, from the House of David.  The Rambam there discusses what it is that we want from the Redemption and why we long for it.  He says the great sages and prophets throughout history longed for the days of Mashiach and anticipated the time of the Final Redemption not because they wanted to rule over the world or be raised above the other nations and not in order to eat, drink and be merry.  Rather, they desired the coming of the Messiah so that there would be peace, tranquility and prosperity in the world and an awareness of G-d’s presence, and so people would be able to learn Torah and understand the reality of the world.  In this time, says the Rambam, there will be no famine and no wars, no jealousies or competition; people will live with each other in peace.  The world will be concerned with just one thing: knowing Hashem.  Then he quotes a famous verse from Isaiah to end the book, that “the whole world will be filled with the knowledge of Hashem like the waters that cover the globe.”

This is what we should long for in awaiting the Final Redemption.  We look around the world and Hashem’s presence is hidden; so many people deny Hashem’s existence.  There is a sense that things should be better.  There is a lack of appreciation for the truth.  This is why, explains the Talmud, it is so important to long for the redemption.  Hashem says, you worry about My commandments, but you don’t worry about My honour.  We live in a world where Hashem’s honour is clouded and blocked off; there is often so much confusion and lack of awareness.  There is pain and suffering, wars and conflicts between people. Obviously we want to live peacefully, but more importantly, we long for a better world where the glory of Hashem can be seen.  This is the question Hashem asks us when we come up to heaven.  He does not just say to us, did you believe in the coming of Mashiach and the Final Redemption, but did you want it, did you await it?

Longing for a better world

This is what Tisha B’Av is about: being able to sit down on the floor and mourn, being able to feel the pain and say we actually want the world to be so much better.  We express this in the second half of the Aleinu prayer which we say three times every day at the conclusion of the services.  We say Al ken nekaveh lecha, “therefore, we place our hope in You, Hashem.”  The Chafetz Chaim comments on this paragraph that belief in the Final Redemption gives a person hope, which is the most powerful motivation to do good in the world, to do the right thing.  Human beings need hope for a better future, a better tomorrow. The Aleinu prayer concludes with Al kennekaveh lecha,”therefore we place our hope in You, Hashem,” lir’ot meheirabe’tiferet uzecha. . .  “that we may soon see the glory of Your power and that the idols will be utterly destroyed and the world will be perfected under the sovereignty of the Almighty, when all humanity will call on Your Name and the earth’s wicked will all turn to You.  And all the world’s inhabitants will realise and know that to You every knee must bow and every tongue swear loyalty.  Before You, the Lord our G-d, they will kneel and bow down and give honour to Your glorious Name and they will accept the yoke of Your kingdom and You will reign over them soon and forever.”

As we head towards Tisha B’Av, a time of sorrow and mourning, we pray to Hashem that this time of mourning and pain be turned into a time of liberation and celebration, when the entire world will recognise Hashem and suffering will come to an end.  We long for a time when everybody can see Hashem, and when the world will be a much better place.  As it says in Isaiah, “and Hashem will wipe away tears from all faces and he will remove the disgrace of his people from the land.”  There will be a time when we will see the truth and the Glory of Hashem will shine throughout the world.

Chief Rabbi Dr Warren Goldstein (born 1971) is the Chief Rabbi of The Union of Orthodox Synagogues of South Africa since 2005. Born in Pretoria, he currently lives in Johannesburg. He is the first Chief Rabbi of South Africa who was born in South Africa and the youngest person ever to be appointed to that post, at age 32. The Chief Rabbi studied at the Yeshivah Gedolah of Johannesburg for more than fifteen years, where he received his rabbinic ordination from Rabbi Azriel Chaim Goldfein; he additionally qualified as a dayan through the Eretz Hemda Institute in Jerusalem. He has a BA, LLB (Unisa), and a PhD. in Human Rights and Constitutional Law (Wits).