Eretz Yisrael (the Land of Israel) is the land that Hashem looks after. His eyes are constantly upon it, from the beginning of the year until the end of the year. (Devarim 11:12)

Throughout the ages, Eretz Yisrael has been known to us as the Holy Land; it is the land that was chosen by Hashem for His people. The unique holiness of Eretz Yisrael is a recurring theme in the words of the Torah and Midrash (see esp. Ketubot 110a). Why was it that Hashem chose this land rather than any other land in the first place? In what way did is it more prepared for spirituality than all other lands? Or, touching upon a broader subject, how can the presence of Hashem dwell in one land more than in others? Doesn't Hashem's presence fill all that exists? If so, in what way can one place be more holy than another?

Undoubtedly, these questions can be approached from many different perspectives. Each answer will fill in another part of the full picture. I would like to offer an insight based on the words of this week's Parsha that addresses this question, in the hope that it may add its own trace of color to that picture.

The land to which you are coming is not like Egypt. [In Egypt] you could sow your seeds and irrigate them by foot [with water from the Nile River], like a vegetable garden. But the land you are going to inherit is a land of mountains and valleys, which depends upon rainwater.... If you keep the Mitzvot that I am commanding you, and you love Hashem and serve Him with all of your hearts and souls, I will make the rain of your land fall as it should.... Take care not to be persuaded to stray from Hashem and serve idols and to bow to them. [If you do so, G-d forbid,] Hashem will be incensed and He will stop the heavens from giving forth rain. (Devarim 11:10-17)

In what way is Eretz Yisrael "blessed" by the fact that it relies upon rain as its water source? Is it not preferable to have non-seasonal rivers providing a constant source of water for the country's crops, as in Egypt? Perhaps this verse means to convey the following thoughts.

There are two types of miracles that Hashem performs on this world. The first is an obvious miracle, involving a change in the natural processes to which we are accustomed. Examples of this would be the splitting of the sea during the Egyptian exodus, and the survival of Chananya Mishael and Azarya in a fiery furnace, to name a few. Such miracles are few and far between (see Ramban Devarim 11:10). Hashem, after all, impressed upon the world the laws of nature for a reason. From the faithfulness and dependability of nature, we can ourselves learn to be faithful to our Creator (see for example Chulin 7a, in reference to the Gina'i River).

With the second type of miracle we are more familiar: a miracle that works within the framework of nature. Examples of this would be rain that comes with perfect regularity (Devarim 11:14), and the protection of the property of the festival pilgrims (that is, those who observe the Torah's commandment to visit Jerusalem three times a year during the 3 Torah festivals, leaving their possessions behind unattended -- Shmot 34:24). In these instances, what happens seems to be perfectly natural. Over X number of years, there will generally be X inches of rainfall, over X square miles. What is supernatural, is the timing of the event. If rain falls with perfect with regularity when the nation follows the word of Hashem and stops when it when the nation does not, or if worthy individuals are spared from a calamity that befalls all of their surrounding neighbors, the hand of Hashem is evident. It is justified to call such a phenomenon "miraculous". (See Ramban Vayikra 18:29, 26:11, for a lengthy discussion of this subject.)

This is why it is a "blessing" for Eretz Yisrael to have to rely upon rainwater. In Egypt, the Torah tells us, there will be a constant water supply. Therefore, it will be natural for the toil of the farmer to bear fruit. It would be disrupting nature for the Nile River to suddenly stop flowing. Hashem would therefore intervene with the Egyptians' means of earning a livelihood but rarely. Because of this, the hand of Hashem would never become evident to them.

In Eretz Yisrael, on the other hand, "nature" is much more fickle. Its water supply is not guaranteed. Hashem uses it freely to measure the devotion of its inhabitants. When they are worthy, it rains; when they are not, the rains cease. Since the livelihood of its inhabitants depends upon the regularity of the rain, they will feel dearly the fact that Hashem rewards the righteous and punishes those who are undeserving. In this manner, Hashem will reveal his presence to the inhabitants of the land. It is certainly a blessing to have a *less* reliable livelihood. (See Ramban ibid., Rabbeinu Bachye Devarim 11:17).

It is now clear how Eretz Yisrael is a land of spirituality. Since it is dependent upon daily and monthly rainfall, it is in this land that Hashem constantly shows His presence to His people.

This line of reasoning suggests a general approach to the concept of "holiness." If Hashem fills all of creation, in what way can one place be holier than another? The answer may be that there actually is no difference between the various places from Hashem's perspective. The holiness of a place is simply a reflection of *our* closeness to Hashem; in certain places Hashem's presence is more obvious to us than in others. This is what the Torah means by saying that Hashem's "rests His presence among us" (Vayikra 26:11) at certain times and in certain places. (As noted above, this is simply one perspective of "holiness." There certainly are more esoteric angles to holiness which are far beyond the scope of our present discussion.)

What we have shown may serve to clarify numerous cryptic statements in Chazal:

"V'haya Emunot Itecha..." (Yeshaya 33:6). [The word] "Emunot" [faith], in this verse refers to the section of the Mishnah that deals with the laws pertaining to plants grown in Eretz Yisrael, since when a farmer plants crops, he is expressing his faith in Hashem (the He will send rain to water the seeds, rather than letting them rot in the soil).
(Gemara Shabbat 31a, and Tosefotad. loc. from Yerushalmi)

"One who lives outside of Eretz Yisrael, is as if he does not have a G-d" (Ketubot 110b). [What this means is,] the other lands all have angels appointed over them [that perform the task of delivering the needs of the land's inhabitants as Hashem wills.] But in Eretz Yisrael, Hashem Himself cares for us directly.
(Ramban Vayikra 18:25- see also Ramban to Devarim 11:10).Because His involvement is more evident in Eretz Yisrael, it can be said that Hashem deals with it in a more direct manner. In other countries, however, He remains less conspicuous, cloaked in the guise of nature!

Rabbi Mordecai Kornfeld, founder and Rosh Kollel of Kollel Iyun Hadaf, has been teaching Torah in Israel for over ten years. A close disciple of Hagaon Rav Yisroel Zev Gustman, zt'l, Rabbi Kornfeld works tirelessly on behalf of Torah dissemination. He was one of the first Rabbis to use the Internet to teach Torah, as his innovative insights in the "Weekly Parasha-Page" has been e-mailed to thousands of readers across the globe since 1993. 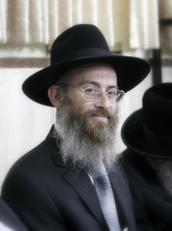